(The Well (a play A Scream in the Well in the Season of Silence

(A review on The Well, a play directed by Abbas Abolhasani)

“_ Nobody wants to die for oneself.

_ But everybody lives for oneself.
_ You were my life.
_ I died for your life.”

After nine months of rehearsal by Abbas Abolhasani’s team of cast and crew, “The Well” is now born and performed on the stage of Abolhasani Theater located in the city of Babol in the north of Iran. The play is written by Alireza Tavana and had earlier been brought to the stage by Saeid Zeinolabedini. But now, thanks to the efforts and fresh ideas of Mr. Abolhasani, and the extraordinary performance of young actors such as Afsoon Namdari, Mohsen Khosravipour, and Ahoura Golamoupour it is again on the stage. A particular feature of this new staging is that it is being performed simultaneously in two languages of English and Persian. This play is being performed twice a day for an entire month, first in English, and then in Persian. The performance of a play in two languages, specifically simultaneously, is a rare occurrence in Iran. This fact goes on to show that Mr. Abolhasani has plans to bring this play to bigger and international stages. 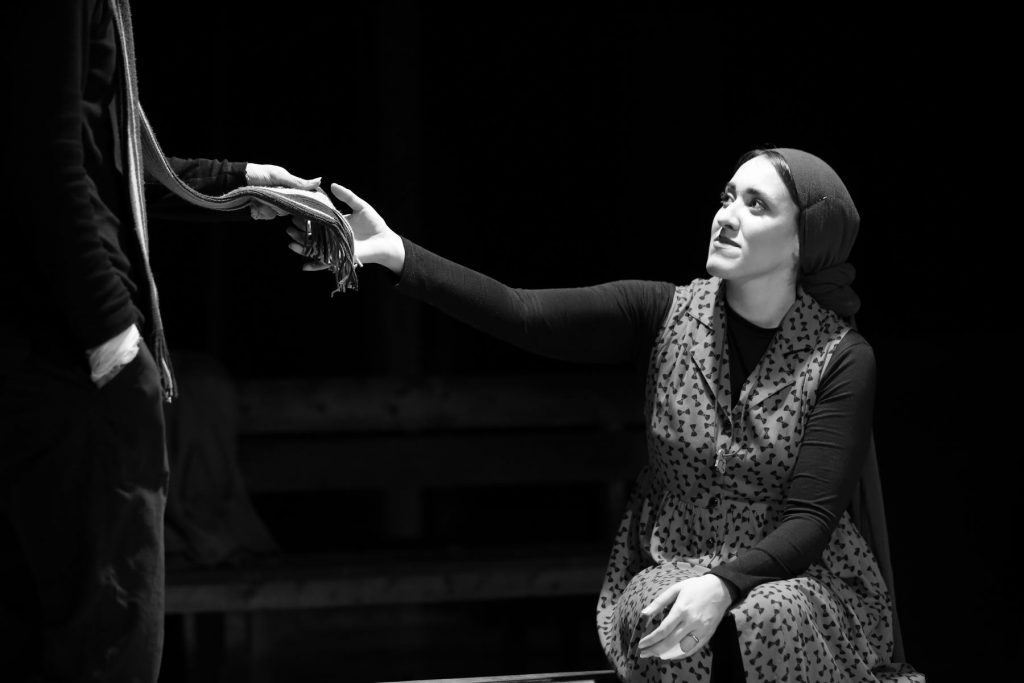 The Well narrates the fateful lives of two lovers. The characters of the play, Khalil and Maryam, are a young couple from the educated class. Khalil is a writer, poet, and teacher who is drawn into a chain of mishaps for his social activism and his fight for freedom and equality for all the people, which results in his capture, torture, and annihilation by the rulers who give no share other than silence and cowardice to their “subjects”. Maryam, Khalil’s wife, lover, and muse suffers alongside him in every stage of their shared life, and bears the penalty of his social activism, but stands steady like a firm column balancing their chaotic life. She only breaks and crumbles when she hears through the media of “the lords” the fake news of Khalil being executed. The fall of these two lovers into abyss begins with Khalil’s trip and apprehension, and ends with Maryam’s drowning into the well after hearing the news of the execution. Khalil, who after being given a furlough and finding out about Maryam’s suicide turns into a hollow shell void of any drive to live, puts an end to his life while standing over the very well which was Maryam’s death place. The very well which was once the device of Khalil’s allegories; the well inside which he saw the pain of the oppressed people, and beyond it his utopia. The place in which bottom we now watch their eternal rumination of their sweet and bitter memories in a yard covered in fallen leaves of autumn, with two benches and a swing. 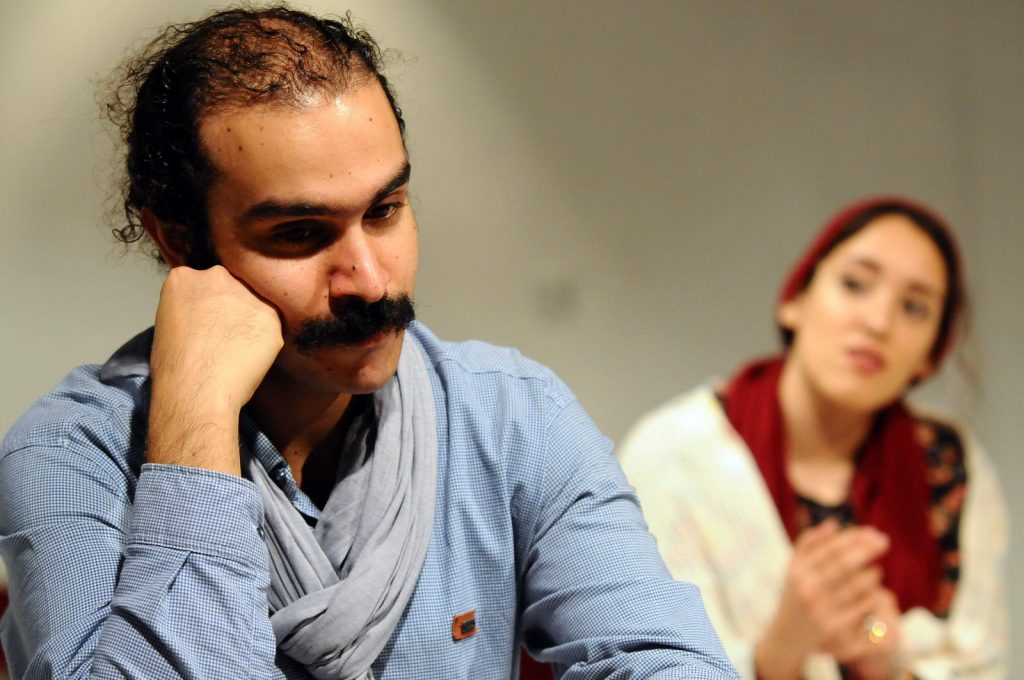 The Well may be a regret over a lost amour _the only thing that gives meaning to the absurd life of the human_ when Khalil says “I cared for nothing except you; nothing except your love … [I regretted] why I wrote any poems other than love songs.” And also an elegy on the burnt and lost dreams and passions. But also, is it a chant in praise of all freedom fighters who have not crept into silence in the face of oppression. The element of well in this play is a symbol for loneliness; the loneliness of Joseph at the bottom of the well of his traitor brothers, or Imam Ali’s loneliness when he screamed into a well for not having an ear that listened, or the innocence and loneliness of Khalil and Maryam by their drowning into the abyss of the well in which they saw their dream of freedom, equality, love, and life. 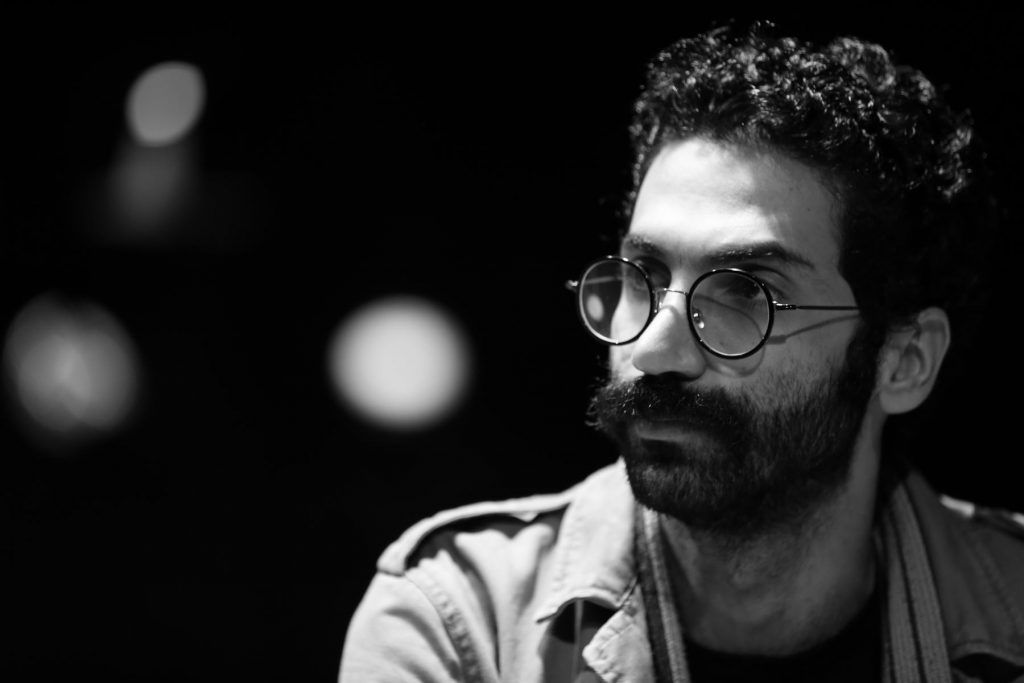 The Well is definitely a successful work of art. In the season of silence, a play has gone on stage that talks of the pain of the educated and cultured people; in the days when most see pain only in material poverty, hunger, and empty dinner table (although even then they sometimes run with the hare and hunt with the hounds) a play in going on stage that talks of cultural poverty, inequality, and lack of freedom. For me, watching The Well was a soothing balm on old wounds and pains. I do not suggest watching The Well, but I find it vital for “the ones who think”.

All the photos used in this article are by Mohsen Gholami, originally posted on the exclusive page of The Well on Abolhasani Theater Academy. For more information, photos, and booking tickets refer to: abolhasaniacademy.ir

Rehearsal: a practice or trial performance of a play or other work for later public performance

Crew: a group of people working behind the scene to prepare a play or a film

Simultaneously: at the same time

cowardice: lack of bravery; being coward

Subject: a person or thing under the authority of a greater power

Muse: a source of inspiration for an artist

Furlough: Temporary leave given; time off

Drive to live: a feeling or force that makes you want to continue living

Allegory: a story, poem, or picture that can be interpreted to reveal a hidden meaning, typically a moral or political one

Utopia: an imagined place where everything is perfect

Rumination: deep recurring thinking about something

Chant: a repeated rhythmic phrase, typically one shouted or sung in unison by a crowd

Creep: move slowly and carefully in order to avoid being heard or noticed

Run with the hare and hunt with the hounds: (proverb) to try to remain on good terms with both sides in a conflict or dispute

Balm: ointment; something that has a soothing pr restorative effect

۲ نظرات on (The Well (a play